First of all, we look into a lot of pretty grotesque faces. But soon we see some pastel patchwork rugs here, some grease spots there, left by the oil paint on the untreated canvas, from which now arms, legs, and heads seem to grow; elsewhere, thin strips of paint, squeezed directly from the tube, run across the painting, and in spite of their pastose application, they seem scrawny and fragile, as if they could at any moment come undone from their foundation and slide to the floor.. In view of such features, Florian Meisenberg seems to be quickly identified as a painter who is fully conscious of the specific (above all the material) conditions of his medium. And also as one who does not just play with the classic parameters of canvas, brush, and paint, but who paints motifs like a massively enlarged cursor and thus brings the digital equivalent of the paintbrush to the canvas, displaying art in all the ‘artificiality’ that is inherent to it at the beginning of the 21st century.

And yet, on the agenda is not so much the permanent reflexivity and the self-interrogation of painting itself. For this, things are done in far too playful a manner here, much too transparently and consciously flippantly; given the historical weight of painting, Meisenberg deals with the usual parameters of the medium in a remarkably relaxed and casual manner (one is almost tempted to say: fully committed and consciously carelessly). That the brush becomes a cursor, that paintings are placed on small cornices that undermine their pictoriality , that elsewhere canvases without supporting stretchers are suspended like flags from the ceiling, or just hang like curtains on the wall – all that has less to do with a permanent distancing from a supposed sublimity than we might think at first. For a long time now, paintings don’t need to be thrown into the dirt, canvases don’t need to be cut apart, or brushes disposed of. Because the sacred seriousness of these gestures and the continuous display of the mission of a permanent ‘criticality’ only confirm the medium of painting as a hermetically sealed insider discourse. Meisenberg on the other hand decided on a different path: All these signatures of self-reflexivity are here treated as a kind of given, and presented with a rare casualness. They appear as part of an extended painterly palette of gestures that can also be used in other contexts.

In a series of videos, for example, we can directly look on the artist’s computer screen. We see how an image of Kazimir Malevich’s Black Square is photoshopped, how using the erasure tool the black angular, quite ‘masculine’ field becomes an irregular circle. We can observe Meisenberg as he arranges windows on his computer, as he clicks on them and thus starts short clips with sequences that seem quite random – pictures from bed, of the beach, of the desk. All this has a painterly sensibility; we are dealing with a rigorous frame, with gestures and positions before a clearly recognisable background. But instead of sublimity, we see everyday life, instead of rigour an incredible nonchalance. And a new space opens up behind formal parallels, one that is much larger than the canvas. In this space, far fewer rules apply, and the questions are suddenly once
again large and general: What does it mean to be an artist? And what is that, art? And what does it mean to make it? And above all, once again,
how does one make it? 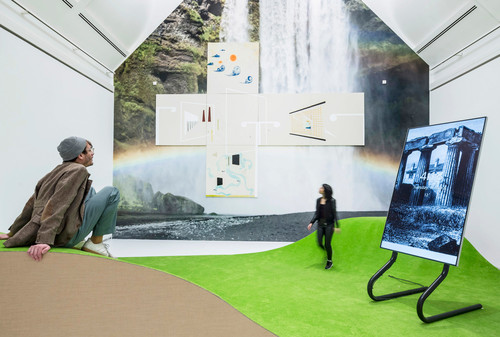