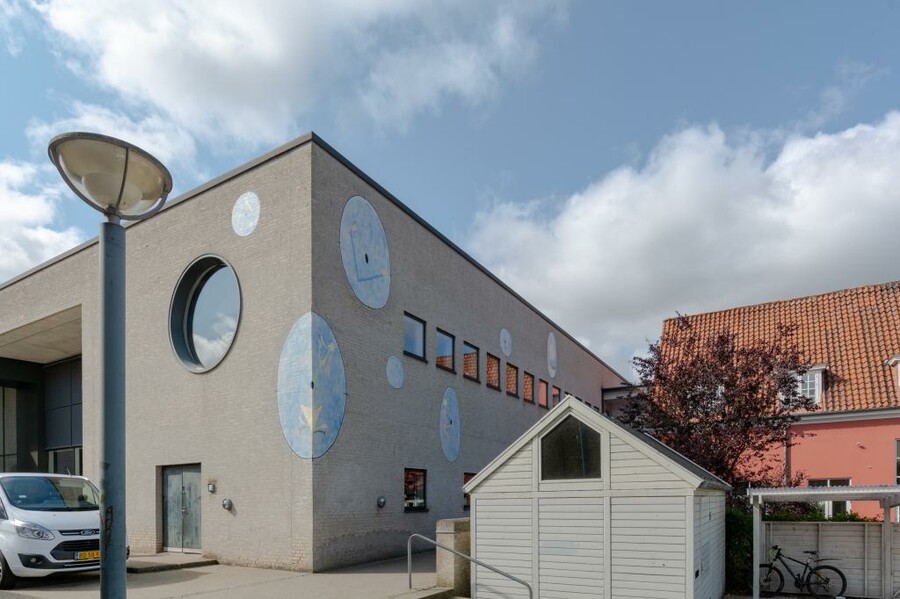 Meisenberg paintings explore the space where the physical and the digital meet. His work "The sky does not reflect your image" is envisioned as a diptych split between the front and the back side of the library. The artist’s interest in collaborative structures that allows for sharing information made the library an ideal site for his mural. For him the similarities and contrasts between a library user physically checking out a book and an internet user opening various windows to access information is rich territory. On the wall next to the front entrance, the artist has created a virtual space, which opens up the library facade to the street as a kind of backdrop, which is animated by various activities in the buzzling street Nygade. “ContentCreators” in the form of anonymous silhouettes occupy window frames in an empty grid suggesting a landscape within a desktop. On the wall by the back entrance, he has painted a series of non functional sky clocks with humorous protagonists. The paintings act as a second layer of skin perforating the architectural surface. At specific moments during the day, the cloudy sky is reflected in the large round window on the library facade, mirroring Meisenberg’s simulated skies. The entire facade becomes the canvas, rendering the windows, doors and bricks elements in the composition.