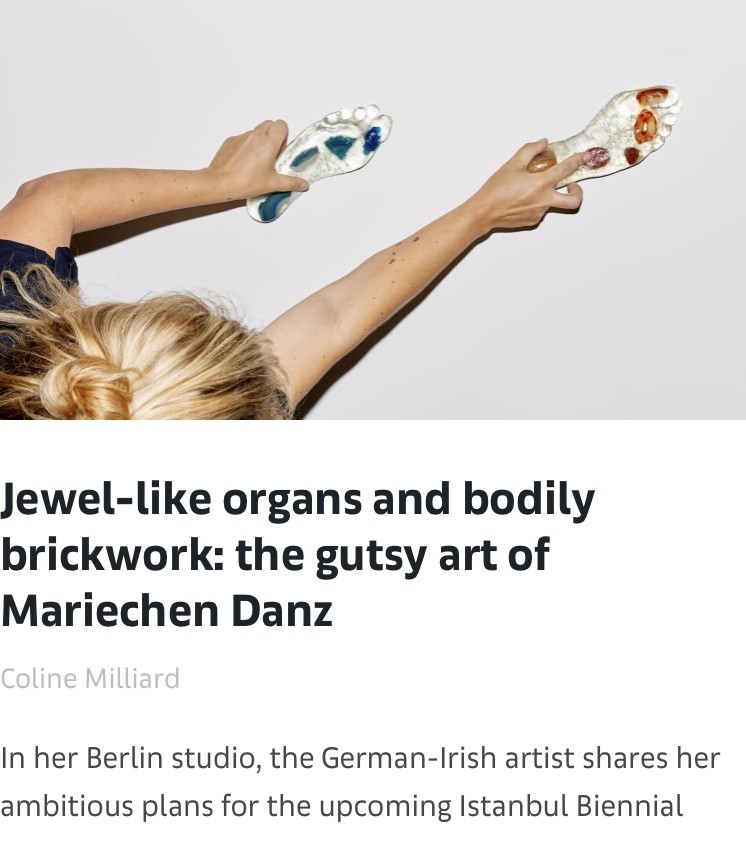 In her Berlin studio, the German-Irish artist shares her ambitious plans for the upcoming Istanbul Biennial

Halfway through our interview, Mariechen Danz breaks into a song. ‘How to know, how to know,’ she chants in a velvety voice, eyes half-closed. ‘The aim was to create a different type of earworm.’ She laughs, stopping dead, then: ‘People would tell me they woke up singing it, which was amazing.’

Written when Danz first dabbled with music a decade ago, ‘How to Know’ has lost none of its relevance. Quite the opposite: The lyrics could almost be a mantra for the voraciously curious Berlin-based artist, whose practice ranges from sculpture to installation and performance. Danz goes for the Big Topics – questions around the nature of knowledge, the myth of objectivity, and the relationship between body and writing abound in her oeuvre. Yet each piece is disconcertingly immediate: Her resin-cast organs, colorful humanoids, and mysterious maps are always alluring, almost calling for the hand. It’s as if the artist was attempting to prove that knowledge can be just as physical as it is cerebral – and that the distinction between the two is a cultural construct that viewers would be well advised to shed.

Danz is one of the 56 artists to be presented in the upcoming Istanbul Biennial, curated by Nicolas Bourriaud. Best known for coining the term ‘relational aesthetics’ in the late 1990s, the French art historian has this time turned his hand to the much-debated concept of the Anthropocene, a period defined by human intervention in the natural world. The Anthropocene is today’s era, and Bourriaud chose to title his Turkish biennial ‘The Seventh Continent,’ after the giant plastic waste mass currently drifting across the Pacific Ocean. The exhibition, he writes, ‘is an anthropology of an off-centered world and an archaeology of our times.’ For Danz, it’s also the opportunity to present one of her largest installations to date.