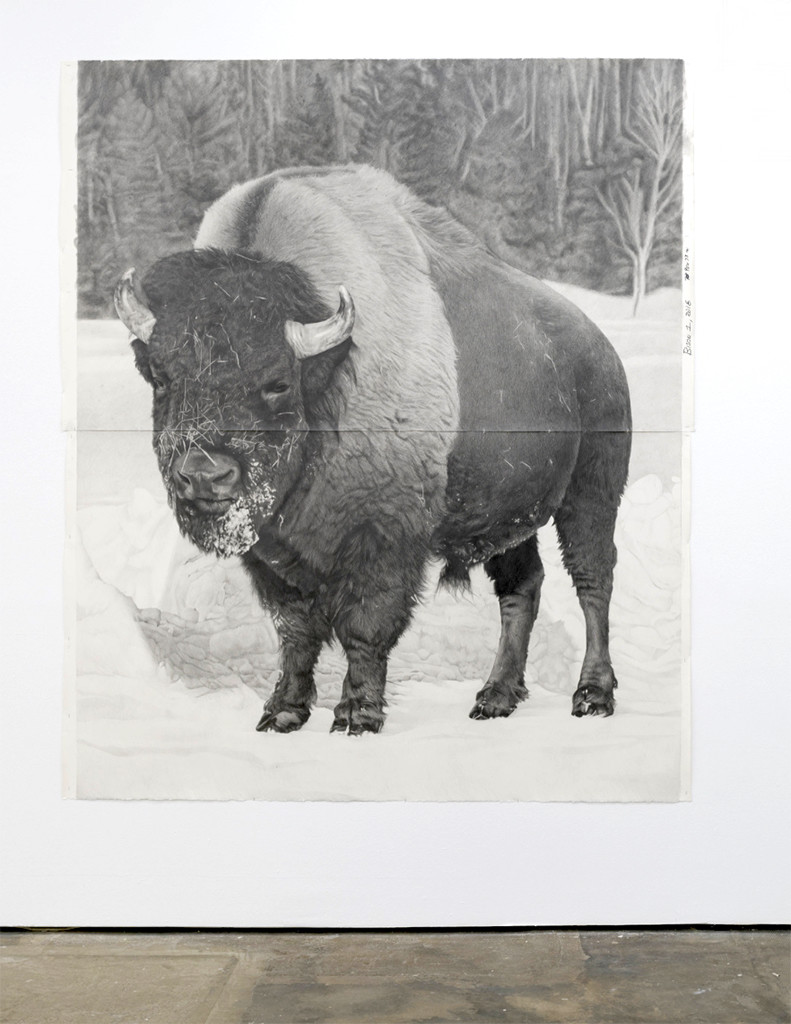 Karl Haendel has used drawing to discover connections between seemingly disparate nodes of cultural data, drawing attention to the overlaps between the social, political, and personal since the beginning of his career.

“This exhibition is not really an exhibition, it might be better described as two exhibitions in one, or perhaps, an exhibition with a split personality. Upon entering the gallery you are immediately confronted with a wall interrupting your path, forcing you to choose which way to go–left or right,” the gallery writes about the exhibition.

The gallery has been bisected by a wall, and each half of the space appears just like its other half; the drawings in both spaces are identical in size and medium, framed in the same manner, and hung in the same configuration.

“The idea of the ‘Doppelgänger’ emerges from romantic literature at the end of the eighteenth century and refers to an entity that possesses the likeness of another — an (almost) identical look-alike. Doppelgänger imagery was often used to examine the duality of human nature or a lack of a true fundamental identity,” says the gallery.

Robert Louis Stevenson’s fictional character from 1886, the friendly Dr. Jekyll, who is possessed by a split personality with an opposite nature, the violent Mr Hyde, or Dostoyevsky’s The Double, whose protagonist encounters an identical look-alike, who possesses all the charm and confidence that he lacks, leading to his own madness and eventual replacement by his stand-in are some of the examples of similar Doppelgänger.

Haendel’s doppelgänger drawings include Child King 1, depicting French King Louis XIV as a teenager and dressed elaborately as the God Jupiter, and Child King 2, depicting the son of Louis XV (Louis, Dauphin of France), peacocking similarly in extravagant attire. In these drawings Haendel reminds us that some of today’s world leaders, whose monarchical tendencies, garish taste, and accumulation of wealth through birthright and plunder, have their historical antecedents.

Karl Haendel (b. 1976) received a BA from Brown University in 1998, a MFA from UCLA in 2003 and attended the Whitney Museum Independent Study Program.