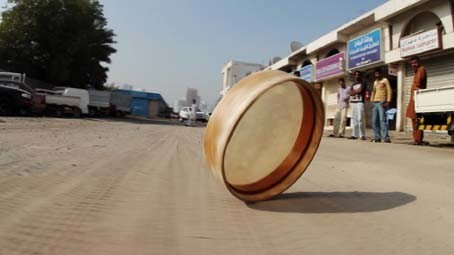 Nevin Aladağ (°1972) brings together a number of video works in her first solo exhibition in Belgium.

Traces is a large-scale sound-and-image portrait of the city of Stuttgart, Germany where Aladağ grew up. Western European instruments can be seen and heard: an accordion plays as it unfolds along the length of a lamp post, a frame drum rolls loudly through a park landscape, a flute trills as it sails off into the sky with a balloon, the chestnuts in a chestnut tree play a gong, and a violin turns on a merry-go-round. As surprisingly as a symphonic interplay seems to arise, it disintegrates just as quickly back into cacophony. The most disparate urban situations become the players in this orchestra. Rocking horses in the pedestrian zone and the slopes of vineyards, downhills on the main street and a carousel in a playground constitute the ensemble that, under Aladağ’s direction, performs an audio rendition of their city.

Some two years prior to Traces, Aladağ created Session in response to a commission for the Sharjah Biennial. Similar to Traces, also in Session musical instruments take the lead in introducing us to Sharjah’s urban areas and desert. Different kinds of percussion instruments from Pakistan, India and Iraq – countries chosen to reflect the heritage of the workforce in the United Arab Emirates – are played by the elements; the sand, the sea and the wind. Drums produce various sounds while rolling down large sand dunes in the desert. They are ‘played’ by brittle loose twigs, waves rolling in and even drops of water from a sprinkler on a well-kept lawn, perhaps outside a luxury hotel. These instruments combined with their ‘players’ hint at an underlying narrative of economic power, cultural heritage and identity.

In both works, city infrastructures and natural elements solicit sounds from local instruments which seem to function fully autonomously, no human being in sight. Neither pure noise, nor fully composed, Aladağ succeeds in creating a quasi meditative city symphony of cultural references in motion.

Where Traces and Session are void of people, they take centre stage in Top View in a very performative though only partial way. For this video, Aladağ approached people of different ages, ethnicities, sexes, and social classes in the center of Munich and asked them to perform a few dance steps for the camera. The people in the film remain anonymous, and one sees little more than their shoes and the movements of their feet, yet a lot is revealed about them and their performance of everyday life. Aladağ composed some fifty of the filmed sequences into a loop which sound is made up of heels clicking and soles scraping on the pavement of Munich’s sidewalks and squares.

Though omnipresent in the exhibition, the works in ROLLIN’ are not just about creating new sounds. On the contrary, Aladağ allows us to reinterpret more or less familiar identities of cities (of Stuttgart, Sharjah, and Munich) and its dwellers, in a rhythmic ever continuous and evolving way.

Text after excerpts from Andreas Schlaegel and Cornelia Gockel