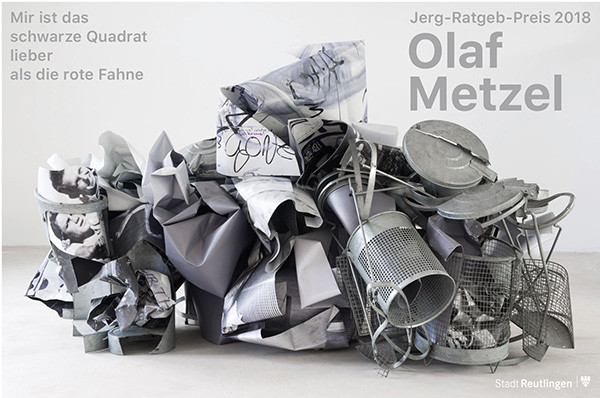 Every four years, the Jerg-Ratgeb-Prize is awarded by the HAP Grieshaber Foundation in Reutlingen. In addition to Carlfriedrich Claus and Lucian Freud in previous years, it had last been won by Joannis Avramidis in 2014. In 2018, the prize will go to Olaf Metzel. Originally cofounded by HAP Grieshaber and Rolf Szymanski, the prize stands for the “freedom of art and for nonviolence in the struggle for more humanity”. Jerg Ratgeb (1480 – 1526) was a painter from Southern Germany whose altarpieces can still be seen today in the parish church of Schwaigern. During the Peasants´ War, the insurgents elected him to the War Council as Chancellor; at the side of Duke Ulrich he fought for the recovery of his territories, which eventually led to him being brought to justice in Pforzheim in 1526. He was convicted of treason and “torn apart by four horses”. The book, published on the occasion of the award ceremony and in connection with the exhibition at Kunstmuseum Spendhaus in Reutlinge, presents a chronological retrospective with exhibition views of Olaf Metzel’s work, which has stood out from the very beginning by a sometimes harsh realism and spectacular settings, which won the artist not only international recognition, but also quite often provoked a certain amount of hostility.

On the occasion of this exhibition, a catalogue will be published.