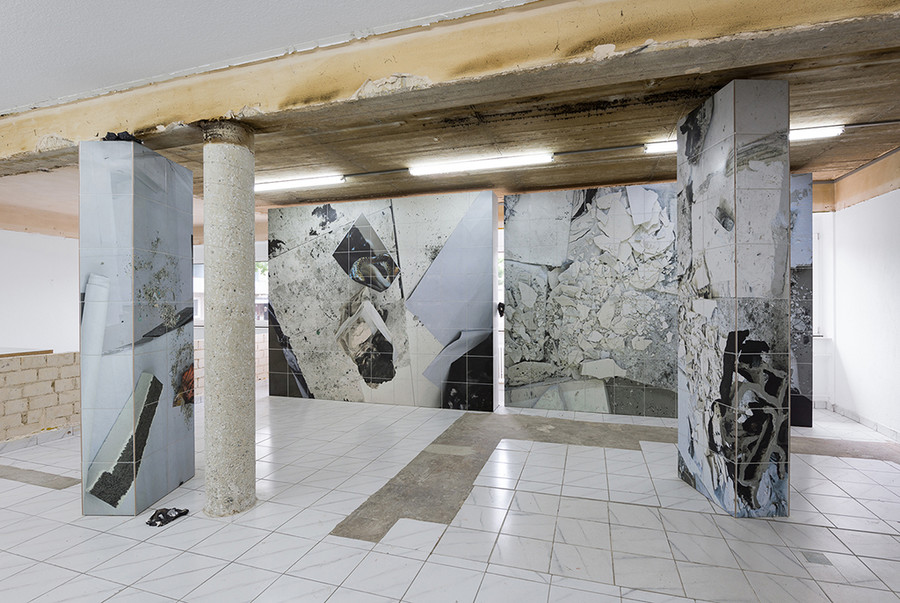 PELES EMPIRE, founded in 2005 in Frankfurt, is based on the Romanian Historicism-Castle Peles, which is characterized by its arbitrary arbitrary combination and copying of established styles and can be regarded as a symbol of the principle of imitation.
This principle of copying and juxtaposing different materials and styles, and the resulting “infiltration” of the “original”, also characterizes the operation of PELES EMPIRE. The work is always closely related to the architecture of the exhibition rooms. In Kassel Kunstverein, the partly deconstructed moment in the “Sternhochhaus” is picked up and characteristics of the rooms are highlighted. Based on the spatial structure, almost functional spatial elements such as shifted columns, space separators and objects arise which raise the question of which elements were already present and which were added.

According to the principle of copying and combining, the existing marble-copying tiles of the rooms are picked up and combined with tiles, which are printed with fragments of earlier work. Sculptures take up the 2D space plans of Peles Castle in their structure and, as their own light source, simultaneously fulfill a practical function.

It is important to note that while the architecture is being used, it remains in its structure. Thus history and human intervention are disclosed at different times