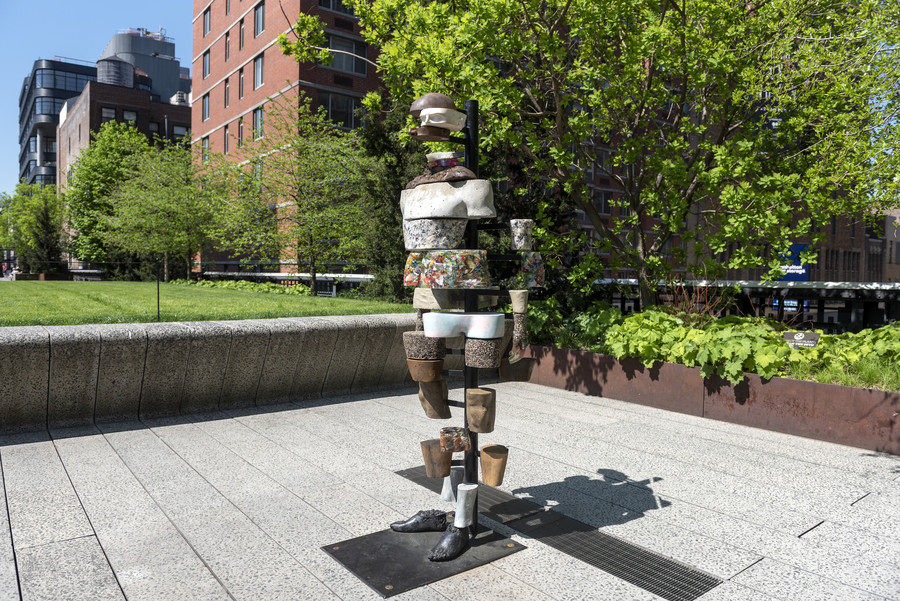 Agora is a group exhibition that looks at the role of art in defining, creating, and using public space. The exhibition takes its name from the ancient Greek word referring to the square—the public gathering area that was the core of commercial, artistic, political, and spiritual life in old city-states like Athens. For centuries, artists have used public locations—and the public in general—as the heart of for their work. By transforming public places into theaters and arenas for performances and collective actions, artists mobilize a kind of collective voice of the people. By manipulating our expectations of what does and does not belong in these ostensibly collectively owned spaces, artists challenge what public spaces are, how they’re made, and who they’re made for. The forms of artists’ works in public space vary widely in scale, volume, and form, from single speaker’s corners to sprawling protests; from grand parades and processions to secret, intimate performances; from bronze historical equestrian statues to initials etched in pavement; and from WPA murals to graffiti tags. However, across time they share common themes, challenging why and how public space, life, and activities are separated from private ones; how boundaries are drawn, built, and transgressed; and who is allowed to stand and speak, and where.

The exhibition looks at the power of art to change society, the role of art in public space, and whether art can be a form of protest. Artists working in public often take a political tone, mobilizing the public for social and political change, and for the possibility of realizing an alternate future. On the High Line—a public space and a natural platform—nine artists share their experiences inhabiting, speaking out of, and challenging the assumed boundaries of public space, where different voices can be heard, addressing important topics such as women’s rights, mass incarceration, the environment, and immigration.

Mariechen Danz (b. 1980, Dublin, Ireland) is a Berlin-based artist who researches representations of the body, investigating the way it has been given meaning in various cultures, epochs, and fields of knowledge. In her installations, performances and music, often in collaboration with other artists and musicians, the human body emerges as a contradictory structure and a scene of conflict—an utterly contaminated zone, both politically and historically. For the High Line, Danz presents a new iteration of The Dig of No Body, a sculpture that references anatomical learning models segregated into individual parts, like a life-sized soil sample in movable layers.The work evokes our changing relationship to the earth, as well as the popular contemporary name “Anthropocene,” which suggests humans’ creation of a new geological era.