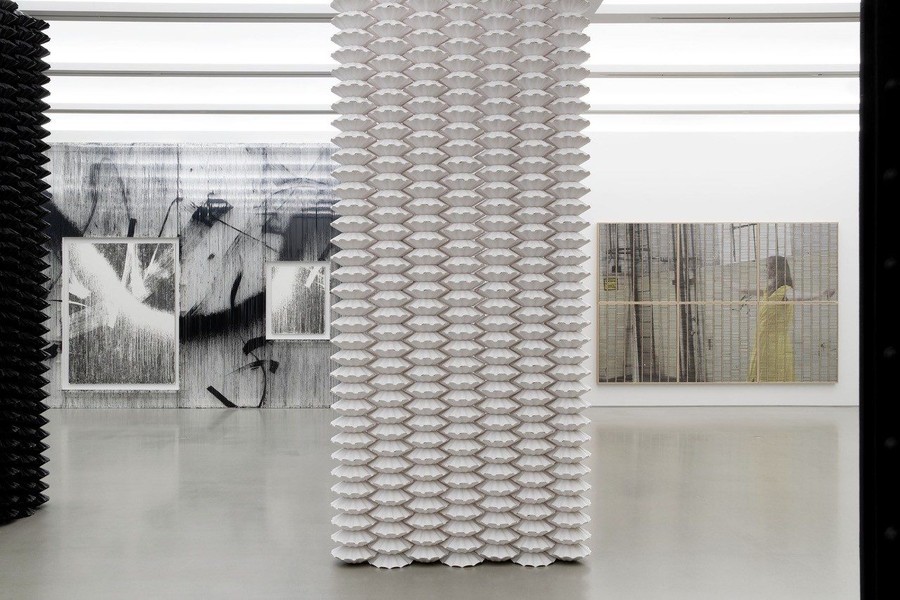 ‘I am a lazy artist,’ my friend, Gregor Hildebrandt told me sheepishly one day when I was visiting him and his girlfriend, Alicja Kwade (also an artist, more industrious), in Berlin a couple of years ago. The confession rang through my head and almost made me laugh at the absurdity of the comment as I wound my way through the path laid out by totemic columns formed of vinyl records at his latest show. It was like entering an underground club, except it was an exhibition at Perrotin Gallery in New York entitled, In Meiner Wohnung Gibt Es Viele Zimmer (‘In My Apartment There Are Many Rooms’).

I’d gotten to the opening extra early as I had a dinner to catch. When I emerged from the labyrinth and reached the heart of the show, I found him hard at work, in his usual rumpled black jacket and trousers, looking, as always, a bit like Christopher Reeve playing Clark Kent, if Clark Kent had been a groovy artist, rather than a reporter for the Daily Planet. He was describing the show to some understandably delighted collectors.

A total pop cultural animal and emblematic of Generation X, Hildebrandt straddles the cosy analog world we remain nostalgic for, and the new virtual world we now live in, which is resolutely cold. His work is always based quite literally on music – walls (real and evoked) of sound. The medium is musical detritus – cassette tape, cassette boxes, vinyl records, VHS tapes, CDs (all originally containing music or performance Hildebrandt likes), given new, glamorous lives as artworks, with titles generally referring to albums, song lyrics and sometimes films. The entire show is infused with music in one way or another and penetrates your soul. Though the departure is synthetic and technological, there is a warmth with a touch of retro decadence – very Berlin.

For years, Hildebrandt has been making paintings out of a specially developed technique of canvases covered laboriously with yards of magnetic tape which then have their coating stripped off to create images. But this time he’s outdone himself with a ‘video curtain’ installation measuring nearly eighteen meters called Die Notwendigkeit der Hoffnung (‘The Necessity of Hope’), inspired by the 1971 George Mathieu performance with the legendary composer, Vangelis, of the same name. It is the negative of a large-scale installation exhibited at Kunsthalle Recklinghausen, Germany.

Not only does he have his trademark paintings, but they are set in windows cut out of faintly fluttering walls composed of ribbons of tape (containing footage of the Mathieu performance) stretched onto wooden frames. The result is like the translucent paper walls in East Asian houses, often known in the West as the Japanese shoji. Even more impressive is that the black and white abstract images within the various paintings burst out of the canvas and splash onto the walls in the negative. I imagined Gregor and his assistants putting all this together. The amount of labor and its precision is phenomenal, and the overall effect is poetic, yet indisputably modern and original. Adjoining this installation are additional towers fashioned of fluted clamshell vinyl records (originally devised as kitschy bowls for chips found in Berlin flea markets). Meanwhile, more vinyl records – electric blue ones, cut into rectangles with their grooves going every which way have been turned into a very snappy geometric painting entitled Ins Blaue (‘Into Blue’). A black version is called Kleines Feld (‘Small Field’).

The lowly plastic cassette box, organized into stacks and coloured, has been transformed into a delicate and haunting image of a woman in yellow, arms outstretched in a bleak industrial space, entitled, Folge dem Gelb (‘Follow the Yellow’). It is a still from a re-enactment by Hildebrandt of the Mathieu performance. In the adjoining room, a series of small canvases, employing tiny bits of cassette tape leader, offer a sly postmodern wink to music as they recall Mondrian’s Broadway Boogie Woogie (1942–1943).

Last but not least, in the connecting Perrotin Gallery shop, played a vinyl record (designed by Hildebrandt) by Paar, a Punky art school band, students of Hildebrandt, whose music seeps through the exhibition in repurposed audiotape and who would later play at the after-party. This was overseen by a series of shelves forming the ‘Pawn Shop’, chess pawns of all shapes, sizes and material, collected by Hildebrandt, a chess fanatic.

By the time I finished the tour, I felt energized. All I was left waiting for was the lights to dim and the disco ball to drop. As David Bowie, a Berlinophile sang, ‘Let’s dance!’