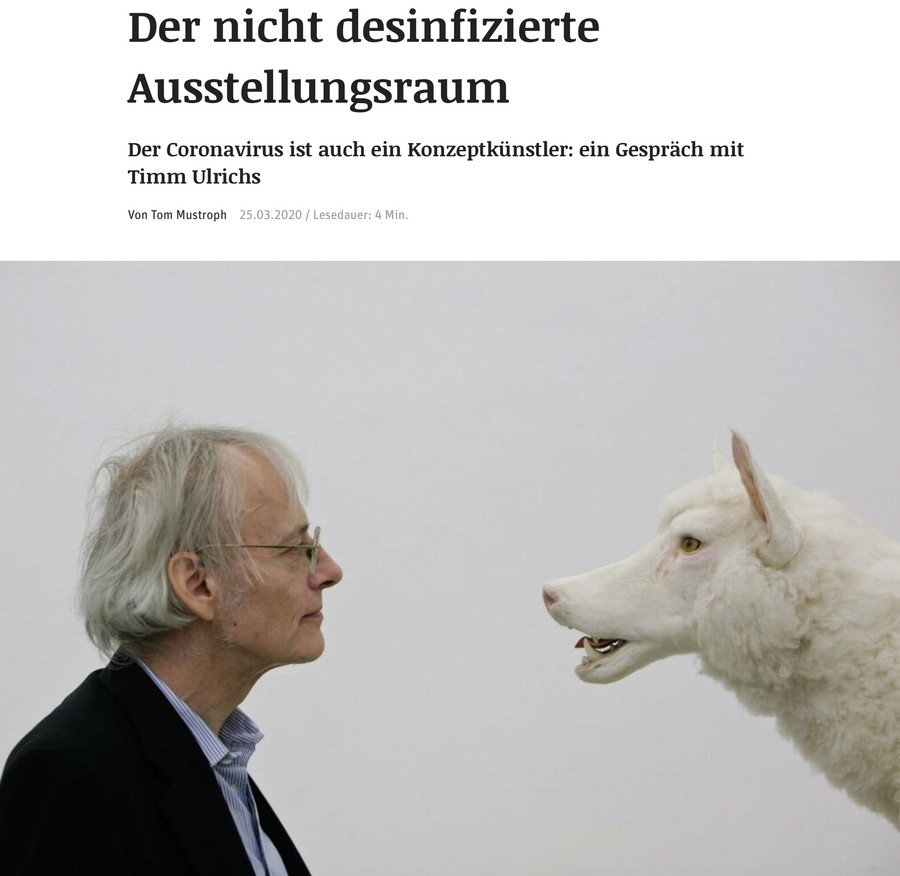 Tom Mustroph in conversation with Timm Ulrichs. The original interview was published in German on www.neues-deutschland.de
Please scroll down for more information in German.

The Coronavirus is a conceptual artist too: a conversation with Timm Ulrichs.

Timm Ulrichs, would you have thought that one day an old work of yours, the warning sign "No Entry to the Exhibition", would have this significance?

Oh, this is just a purely accidental coincidence. But it doesn't harm the work. It's even becoming more serious.

How did this work come about in the first place? The period of origin stated is 1968 - 2010. In the 1960s, you sterilized an exhibition room and sealed a gallery to point out the artificiality of the exhibition business. Can you describe the context in which it was created?

It is based on construction site signs, "No trespassing on the construction site". I first had the sign made as a unique piece for an exhibition at the Kunsthalle Düsseldorf. I occupied a room that was not intended for the exhibition by sticking this sign on the locked door.

So you disinfected the room before?

That was at another exhibition at Haus Lange in Krefeld a few years later. There were three bathrooms in this house, built by Mies van der Rohe, with the same layout and equipment. I had the doors replaced with plexiglass panels. The first room was left normal - the non-disinfected room. Then came the identically looking disinfected room. And finally the room with the spread rat poison, a very attractive looking grit in the colours blue and pink. The disinfected room was visually not distinguishable from the non-disinfected room. We have cleaned it according to all rules of medicine and and had it inspected by the public health department. We even had an official document.

Another surprising parallel to the current Corona situation, right?

Yes. It shows how little we can rely on our visual perceptions. Back then I had also displayed boxes with fresh water and salt water. For the creatures that live in them, the difference is existential. But if you see fresh water and salt water displayed only in containers, you cannot tell the difference. And it is similar with this virus now. The danger is huge, even though you can't see it.

You were born in 1940, you experienced the Second World War and even more consciously the difficult post-war years. Is the current situation comparable?

An important difference is that you don't even see the dangers now. But there also lies something healing in the current situation, because you can see that we are all living on the edge of the precipice. After all, I didn't grow up in an affluent society as a child, where everything was in abundance, but I still internalised the hardship.

Does all this tempt you to an artistic reaction or do you rather pause, also out of piety because of the many sick and dead?

Well, Well, I'm not the kind of person who comments on something as soon as I've read the newspaper. If so, then a reaction will emerge over time.

How do you take it that the coronavirus has now also intervened in your conceptually conceived exhibition currently at the Haus am Lützowplatz, in which 100 different works are supposed to be brought into the gallery space over 100 days? Now there's an indefinite pause.

One could actually see the whole thing as conceptual art. I've always been interested in research on the speed at which rumours spread. This goes back to the times before the Internet. You can grasp it in mathematical models, which are then presented in a very attractive geometric way. In this way one could also represent the spread patterns of the virus in a neutral way, free of values. That would already be a picture in itself.

What is similar to conceptual art is that everything happens less in the visual - apart from the pictures from the hospitals and with the coffins in the military vehicles. But it can largely not be experienced visually and acoustically, but shifts into the mental, into the head, also with all the commandments and prohibitions that arise from it.

In this sense, Corona is a conceptual artist?

Yes, exactly, because it changes our perception.