When approaching John McAllister’s landscape paintings, we should first take a look at photography. Long before Joseph Niepce fixed a photographic image onto a tin plate in the 1820s, there already existed devices to show an accentuated sliver of the visible world. Even though those glimpses proved fleeting, mere projections created by focused light beams reflected from the things of the world, the camera obscura emerged as the device of choice for painters by bringing the world directly onto the canvas.

Within John McAllister’s canvases we find bushes, trees, leaves and grasses in motifs reflective of the California vegetation which form the origin of his work. His color palette features a certain peculiarity: heaven and earth are kept in dark violet and blue, the flower stems, petals, and tree trunks in bright orange, and settled upon the ground are light greens and yellows. As unusual as the choice of color seems, there is something nonetheless familiar about it. The stark color contrasts vividly evoke the qualities of analog photographic negatives. Where the reversal of the recorded light-dark conditions will be reset in the darkroom through exposure of the photographic paper again, McAllister’s ferns, leaves, and flowers appear to be a sort of inverse – somehow painted plein air in the California landscape from the darkroom. It is as though he has made an object derived at an intermediate moment – after exposure and before development – only to then be given a picturesque form.

However, McAllister’s landscapes do not extend across the entire canvas. As ‘mise-en-abyme’, they form a picture within a picture, a landscape resting on layers of décor. With meandering lines, grids and crisscross patterns – similar to those of tablecloths or carpets – McAllister builds out the image and sets the landscapes on a small stage of about 5 centimeters deep. As such, his canvases offer simultaneously the opportunity to look at and through the image. Thus the landscape becomes the subject, as well as the object – it represents and is simultaneously self-represented, lying on a carpet or hanging on wallpaper.

Formally, one can put his canvases in alignment with the representatives of classical modernism – from Henri Matisse to Georges Braque – but perhaps even more so with the holographic plant portraits of the 19th century. There the unexposed paper forms the lines of the plants, grasses, leaves and branches that appear to sit upon on a blue background, which flicker between surface and depth. So it is only fitting that many of the forms in McAllister’s paintings arise by omission, as they correspond to the early photograms both formally and aesthetically.

McAllister’s canvases are thus neither completely obliged to the depict nature as it is, nor pay homage exclusively to the painted picture alone. Rather, his canvases open an impressive window onto a picturesque world of the photographic darkroom, rendering luminous landscapes that could only have originated there. 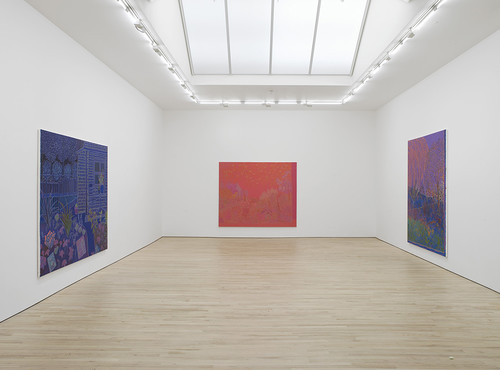